In a super modern space, we offer a unique experience to rejuvenate body and mind as well as relaxation and welfare with body and face treatments. You can simply choose among hydrotherapy pools, individual baths in a special thin rain shower, sauna, steam bath or being sprayed from distance and rejuvenated through massage techniques with essential oils offered through mud or sea therapy.

LOUTRAKI THERMAL SPA is located in the city of Loutraki, in the north cove of the Corinthian Gulf. It has been a famous place for its healing waters since the ancient times, then called "Thermae" and owes its name to the thermal baths which took place in the curative springs. The ancient city of "hot springs" owes its name to the "" THERMAL” ARTEMIDA, protector of the hot thermal springs and is the favorite city of the gods. There, APOLLO, god of the sun and the tranquility and the mother of the gods IRA had temples for their worship.

The well known from the ancient times healing and beneficial properties of the waters of Loutraki, provided and still provide through the centuries, prevention and treatment for many diseases, musculoskeletal, skin and other diseases of the human body. Since the time of Hippocrates, it was found that hydrotherapy in warm water (30 – 31C0), promotes muscle relaxation reducing sensitivity to pain. While the properties of spa water in conjunction with temperature, decrease the level of stress hormone in humans.

The miraculous waters of Loutraki, have linked their name since the ancient times with the treatment of many eminent personalities, among them the Roman military and political Lucius Cornelius Sulla (138 BC-78 BC), who, with the use of thermal waters of Loutraki, was healed from a serious skin disease.

The beneficial effects of thermal water of Loutraki were well known much earlier in the ancient world, since the first reference for their beneficial properties had already been done by the historian Xenophon, who in his works "Greek", states that Spartan soldiers after battles resorted to the curative waters of the Thermae to rest and rejuvenate, in the today’s city of Loutraki.

The use of thermal waters of Loutraki with the beneficial effects continued throughout the era of Byzantine and post Byzantine years and then Loutraki, with reference to the thermal baths, was identified as a metropolitan center of tourism in Greece and the first treatment station.

Through the depth of centuries the curative water of Loutraki, has been established as a symbol of natural healthy living, welfare and rejuvenation and accurately this unique gift of nature has been characterized as ''The water of life.'' 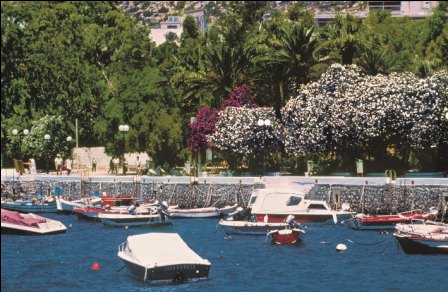 Loutraki is the birthplace of the Greek thermalism and it’s characterized as the premier spa resort of Greece. It has been working as a structured organized  thermalism since 1914 while the Greek state was still in the preparatory work of Greek tourism.

The modern history of Loutraki begins in 1847, when the first analysis of mineral waters was made by Professor Giovanni Battista Delvinioti.

In 1855  the first wooden building bath was built with 10 baths, while in 1874 it was replaced by a stone building .
In 1855, the first municipal company operating spas was created in Loutraki, which offered efficient services to the Department of Health Tourism.

In 1899 a new modern one for those times was built with 22 baths, on the location where now the modern new spa is, which was ultimately demolished in 1967.

In 1934 the exquisite classical architectural building of luxury bath was built which was renovated in 2009 and was connected harmoniously with modern facilities of the new building which is now called LOUTRAKI THERMAL SPA.

E-mail:
This email address is being protected from spambots. You need JavaScript enabled to view it.